“Thanks for providing better days for our daughter” 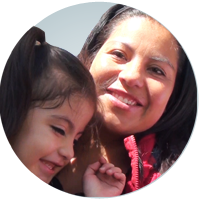 There are times when hope is depleted, but when faith holds firm, it can be suddenly regained. This is precisely what Magdalena Maripud and Edgar Alcivar experienced as parents of little Camila who is suffering from the KJlippel Feil syndrome, a congenital disease characterized by a spinal malformation which limits cervical vertebrae functions, among other complications.

The Almeida Malpud family lives in the Ibarra Canton in the Province of Imbabura and five years ago they had twins. After a four month struggle, Camila survived her sister but is constantly having health problems. She was born with a sunken palate for which she was intervened at the Vaca Ortiz Hospital but could not be operated on for a second time since her shoulder blades were too high and would prevent tubing.

Her parents recalled visiting different health institutions in search of help to find a better quality of life for their tender daughter, to no avail. They claim to be lucky to find the Happy Faces Foundation through the San Vicente de Paul Hospital during an audiogram exam for Camila.

On February 8th of 2014 the Foundation visited the city of Ibarra to evaluate children with congenital or acquired malformations and had no doubts about accepting his daughter. In tears, he recalls the moment he spoke to Dr. Jorge Palacios, Foundation Director, so that he would operate on his daughter. "He told me it would be simple, and was surprised when I mentioned she had the syndrome and claimed it was the second case he had seen in Ecuador since he had the Foundation but that I was with the right person", said Magdalena Malpud.

It was then that hope re-entered his life and he met Margarita Villavicencio, Head of Social Work at the Luis Vernaza Hospital who offered all support necessary for little Camila´s surgery which, due to its complexity had to be derived to the Roberto Gilbert Children´s Hospital for pre-surgical evaluation . Later, she entered the Plastic Surgery Service at Hospital Luis Vernaza so as to free sternum muscles and bilateral plastima, which loosened the rigidity in her neck and allowed for head movement . Both hospitals belong to La Junta de Beneficencia de Guayaquil which would cover all surgery expense.

Now Magdalena and Edgar are enjoying their daughter´s improvement and claim to be grateful to the Junta, the Happy Faces Foundation, Dr. Jorge Palacios and to everyone who made it possible to improve his daughter´s and family´s quality of life. "Faith restored the hope of better days for our daughter", he manifested.

“Thanks to the Junta Beneficencia I got my eyesight back" 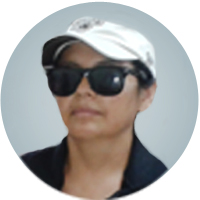