“Thanks for attending to my grandaughter and exonerate medical expenses” 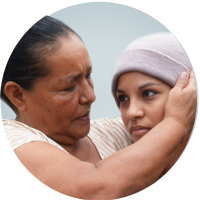 Doña Desideria, 54 years old, tells about harsh realities facing her granddaughter with infinite sadness. She describes her as a young girl whose smile has slowly withered away. "She is so aggressive she hardly has any friend left. She doesn´t want to be seen because she thinks people laugh at her", she comments in a sobbing manner.

Carolina is 16 years old and a life filled with hardship. At an early age she had to face the early loss of her mother, her father´s mortal illness and the numerous pathologies which have kept her interned at the Dr. Roberto Gilbert Children´s Hospital of la Junta de Beneficencia de Guayaquil since she was 8, an age in which she was also diagnosed with bipolar disorder and schizophrenia at the Neurosciences Institute, which also belongs to the Junta.

Her various ailments and emotional hardships have driven her to attempt suicide on over two occasions according to her paternal grandmother, Desideria Jacinta Cabrera, her legal tutor.

"I have no further tears to shed", says this noble woman who not only has to deal with the difficult circumstances of her eldest granddaughter but also carries the pain involved with the loss of two of her five sons, the grief of watching life ebbing from another son, the loss of her daughter in law and the responsibility of feeding and upkeeping 7 additional children, 4 grandsons and 3 minors as a result of relationships corresponding to two daughters-in-law, one deceased and the other missing for the last two months.

Desideria must attend a specialized Foundation so that one of the minors, suffering from autism, can obtain special attention; "however oftentimes there isn´t enough money and I can´t take him". The fact is Mama Desi, as her grandsons call her, washes others people´s clothes to meet daily expenses from which she perceives between 30 and 50 dollars on a "good week".

"That is why I haven´t the words to thank all the support the Gilbert Hospital has given me. Without their help I would have been unable to attend to my granddaughter and now even my grandson will benefit", says the grateful grandmother on learning that expenses incurred at the Roberto Gilbert Hospital during Carolina´s stay, were exonerated; and that besides both the adolescent girl as well as her small cousin, will receive ambulatory attention and medicine at the Neurosciences Institute. 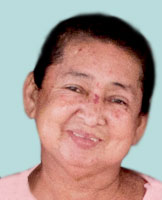