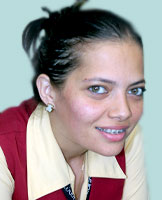 Andrea Latorre is a young mother who had to face the hardship of reality. Her son Lucas was born with a deformity called a clubfoot affecting his right foot. Thanks to the attention given at the Roberto Gilbert Children's Hospital belonging to the Junta de Beneficencia de Guayaquil, the child is today taking his first steps in the hope of leading a normal life, once treatment is concluded.

At the moment of birth, Andrea could hear the doctors commenting on the baby´s foot. "It was a shock to me because I never imagined my son would be born deformed and unable to ever walk normally again", she remembered.

In despair, she took him to several doctors. One of them told her he had a clubfoot and began treatment with several casts, to no avail. Lucas received a total of three treatments, the last one six months after being born at La Junta de Beneficencia de Guayaquil Roberto Gilbert Children's Hospital.

"If I would have brought him initially to this Hospital my son would already be walking and I would not have spent so much money. In each appointment and cast placement I would spend 100 dollars, a week", recalled Andrea who is feeling happy because her son, after 7 casts, one per week; and a small, 25 minute surgery has corrected his foot deficiency but must use the cane for about three to four years to maintain the right position.

Lucas is now a year and three months old and has begun to take initial steps at the hand of his mother who never lost sight of his situation. She is thankful that the Roberto Gilbert Hospital has specialized doctors and a particular area to treat this pathology.